For more than 35 years, Watson roofing has been a family affair. 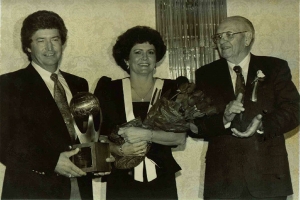 In 1978 when Anita and Gayle Watson started Watson Roofing, they really had no idea that they would end up installing millions of square feet of roofing throughout the Southeast and many other parts of the country. Over the years, they grew Watson Roofing into a company trusted by private building owners, municipalities, school systems and other government entities to use the best roofing products and offer quality installations. As one of Duro-Last Roofing, Inc.’s first contractors in the south, over 30 years ago, the Watson’s garnered every accolade afforded by the roofing manufacturer including the coveted “Contractor of the Year” title, pictured above.

As the years progressed, daughter Gayla Watson married Ben Kail. Ben, now the Watson’s son-in-law and bright businessman in his own right, became an integral part of the Watson team acting as both superintendent on job installations and the primary point of contact for all of Watson’s customers.

Early in 2014, Gayla and Ben took over Watson Roofing, to allow Anita and Gayle more time for the grandchildren. It’s still to be determined whether or not the grandchildren will follow in their parents and grandparents footsteps – after all they’re still in elementary school.

Here are some of the Duro-Last award pictures from over the years.